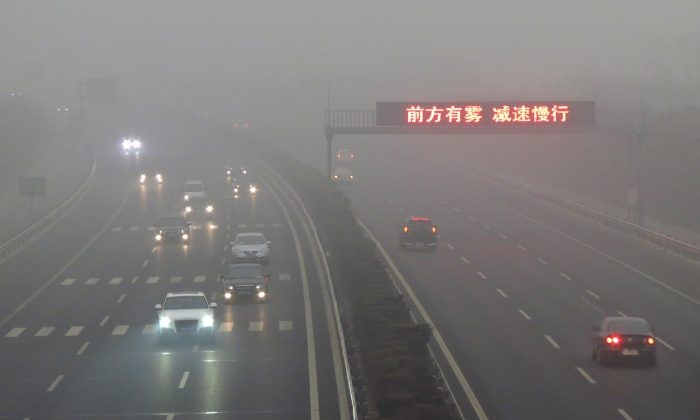 Air pollution made travel difficult in China during the Chinese new year of 2019. This photo was taken in Beijing on March 17, 2012. (STR/AFP/Getty Images)

Amid the Lunar New Year holidays, severe air pollution in great swathes of China has caused major highways and roads to be closed due to poor visibility.

During the week-long national holiday, most factories, mines, and companies in China are closed. There are also fewer cars on the road as families spend time at home to celebrate.

China’s Ministry of Ecology and Environment released data on Feb. 5 that at 2 a.m., the average density of fine particulate matter, or PM2.5, of all Chinese cities with a monitoring system was 139 micrograms per cubic meter of air (m3), reaching an air-quality level unhealthy for sensitive groups.

PM2.5 is fine particulate matter no bigger than 2.5 microns—or two-and-half millionths of a meter—in diameter. Particles of this size can bypass the human body’s natural filtration systems and reach the lungs, according to scientists.

The ministry further noted that in 116 of the total 338 cities, PM2.5 levels reached higher than 150 micrograms/m3, indicating that air quality conditions were unhealthy. In 40 cities, PM2.5 levels were above 250 micrograms/m3, which means air quality conditions reached very unhealthy levels, according to international standards.

In Beijing, the capital city and one of China’s most severely polluted cities, the PM2.5 level reached 177 micrograms/m3.

The China Meteorological Administration announced on Feb. 6 that thick fog spread in most regions of Shandong, Jiangsu, Jiangxi, and Hunan provinces. That day, half of the provinces of Anhui, Zhejiang, Fujian, Hubei, Guizhou, Guangxi, Henan, Shanxi, and Shaanxi also had dense fog.

In eastern China’s Shandong Province, most of the highways were closed on Feb. 5 due to the fog and did not reopen until the afternoon of Feb. 7.

State-run media Xinhua reported on Feb. 6 that not only Shandong highways but also most of the cross-provincial roads would be closed due to the fog.

Because roads could be closed for several days, the report suggested that travelers plan ahead before they leave.

Normally, the provincial roads, built by local governments and free to the public, are the alternative highways in China. But if both the highway and provincial roads are closed, travelers are left with no option.

Feb. 7 is the third day of the new year, which is the traditionally the day married couples visit the wife’s parents in the local culture of Shandong. The poor visibility made the traffic very difficult. Xinhua reported that few cars were on the road that day.

Xinhua also said the recent bout of air pollution was caused by firecrackers people set off during the new year, but many Chinese questioned this reasoning.

Most Chinese cities have rules against the sales and use of firecrackers. Chinese usually buy electronic firecrackers to celebrate the new year, which play the sounds and lights of real firecrackers without any fire or smoke.

The very fabric of America is under attack …

Our freedoms, our republic, and our constitutional rights have become contested terrain. The Epoch Times, a media committed to truthful, responsible journalism, is a rare bastion of hope and stability in these testing times.

While other media may twist the facts to serve political agendas, we deliver stories while upholding our responsibility to society.

We’ve reported truthfully on the current U.S. administration from the start. We reported on the real possibility of a Trump victory in 2016. We’ve led reporting on the Chinese communist threat since 2000; we have been exposing communist thought in our government, schools, universities, popular culture, and media; and we, like no other media, are rigorously investigating and exposing the unscrupulous agents working to subvert our society.

Stand with us in advancing a truly independent and truthful media—the way a free press was intended to be, as a cornerstone of the Republic. Your contribution allows us to continue piercing through the surface narratives of mainstream media, and provide you with a full picture.

Epoch Times editor-in-chief Jasper Fakkert urges you to support our independent media. We are asking you to help us raise $1 million to support our unique and truthful content.

Every contribution counts, big or small. We sincerely thank you for your continued support and encouragement in these critical times. The Epoch Times is published by The Epoch Times Association, Inc., a 501(c)(3) nonprofit. 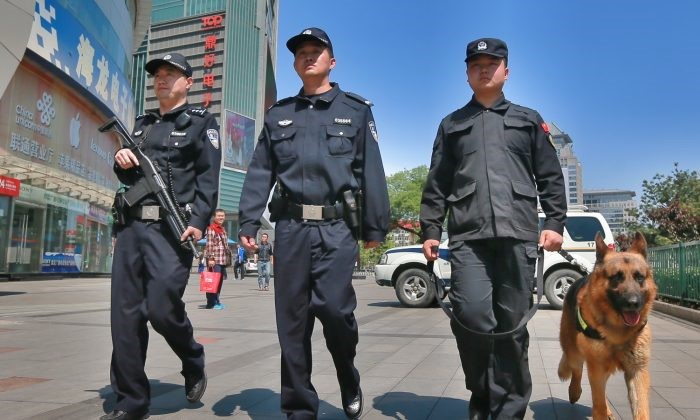 09.01.2019 start Comments Off on China Subjects Police to Quotas to Encourage Arrests of People of Faith