NEW YORK—Wang Shan Shan woke to pitch darkness at 4 in the morning to find something wet. Her water had broken. It was Valentine’s Day but her husband was far away in a distant city in China and not speaking to her. As a new refugee, with no relatives in New York City, Wang went to the next room and woke her roommate.

Her roommate called the ambulance and rode with her to the hospital. They drove past blurry nightlights, as Wang worried about health insurance in this foreign land; then, she felt a sharp pang in her heart. She had thought of her mother.

Her mother, who had been by her side during the delivery of her first-born, was being tortured in a crowded detention center in China for her adherence to Falun Gong, a spiritual meditation practice banned by the Chinese Communist Party (CCP). The last Wang heard, her mother’s heart was failing and the two bruises on her neck had swollen into lumps that may be tumors.

Also, Wang’s husband had been pressured to file for divorce because his marriage to a Falun Gong practitioner was affecting his government career. Worst of all, the CCP had pressured Wang to abort her second child. She could not do it.

So on a cloudy night on July 9, 2012, she left China, alone, against her husband’s will, and against her maternal instinct to bei with their one-year-old daughter. But she had to save her unborn child.

When she arrived in the States, she was two months pregnant and completely alone except for a younger brother who lived in upstate New York. Yet for the first seven months of her stay, she decided to reside, of all places, in New York City.

New York City may not be regarded as the crest of justice, but for people like Wang, it was the most relevant place where she could exercise her right to freedom of speech. New York City was the place for her to begin her work toward bringing justice to her dead father and illegally detained mother.

The headquarters of the Global Service Center for Quitting the CCP is located in Flushing, Queens. Upon arriving in the city, Wang joined immediately.

Wang, 33, volunteered there for three months, making calls to citizens in China to bring news from uncensored societies, to break through the Chinese government’s propaganda.

She would pass out Falun Gong persecution information fliers by Pier 17 at the South Street Seaport. She would protest with other Falun Gong practitioners in front of the Chinese embassy, at a spot overlooking the Hudson River.

With a bachelor’s in business communications and a PhD in psychology, Wang made use of her communication skills.

“My sister is a very reasonable person with a strong personality,” said Wang’s brother, who did not wish to be named.

On April 19, she and her brother wrote a letter to Amnesty International, the U.N. Commission on Human Rights, and the Chinese and American presidents, to bring awareness to the persecution of Falun Gong in China.

Falun Gong is a spiritual meditation practice with ancient roots, based on the principles of truthfulness, compassion, and tolerance. Jiang Zemin, the head of the Communist Party at the time, launched a nationwide persecution campaign in July 1999 because he felt that the popularity of the practice, which had 100 million adherents, was a threat to the existence of the CCP.

Although the meditation practice had no political motives, the CCP saw the very existence of such a group as a threat to the principles it was founded upon: the destruction of traditions, and the sowing of animosity and distrust among Chinese people.

Wang has also met with congressional members to discuss her mother’s situation.

On May 23, her mother’s lawyer contacted Wang and told her that he had done all he could to help her; he was dropping the case as the court would not accept it.

For 19 months, Wang’s mother, Liu Aihua, has been illegally detained at the Zhuhai City First Detention Center without a trial. For 19 months, her family members have not been allowed to visit or speak to her.

According to the lawyer, Liu sleeps on the floor in a small room with 40 people. If she gets up in the middle of the night to use the restroom, she will lose her spot.

Liu Aihua was arrested at 2 in the morning, one day in November 2012. A dozen plainclothes policemen charged into a home where Liu worked as a nanny and abducted her. The next day, they returned and took 89,061 yuan (US$10,200) cash from Liu’s luggage, along with some personal items. The family never saw the money again.

At age 59, Liu is undergoing forced labor work in a cold and wet facility with dim lights. She is also forced to watch brainwashing videos to turn her against her spiritual faith.

Since 2001, Liu has been arrested seven times. One of the most painful arrests, Wang recalls, occurred in August 2011. Her sister had just undergone a cesarean section and her baby was in intensive care. Liu returned home to take care of her daughter. On the morning of Aug. 20, police gathered around her sister’s home and arrested their mother.

“We could barely take care of ourselves, and now they arrested our mother,” Wang said. “To us, it was as if the sky had fallen.”

Wang’s father, Wang Guanghui, was arrested four times for practicing Falun Gong before he died. Again, the family was not allowed to see him.

Wang once had to pay 200 yuan (US$33) to buy less than 20 minutes of time to see her father at the Number Two Detention Center of Shaoyang City.

During the visit, a glass window separated her from her father. He was thin, severely bruised, and had a ghastly complexion. They communicated through a small chalkboard that the prison provided. With great difficulty, he lifted his hand to write back on the board. He asked why her mother had not come. Wang did not have the heart to tell him that her mother was detained at another location.

A few months later, Wang’s father was transferred to another location for his body had become dangerously frail. On Sept. 22, 2009, he passed away from kidney failure.

Meanwhile, the police continued to visit their family every month to monitor them; their home was ransacked on multiple occasions. “Our friends and relatives were threatened and harassed,” she said.

“I had nightmares of my parents being tortured,” Wang said. “It is hard to imagine how we survived that time.”

Wang’s parents had four children, despite the Chinese government’s one child policy. Her mother was an elementary school teacher, her father a middle school teacher. As punishment for having children, the couple lost their jobs.

Wang’s father gradually grew sick from stress, trying to make ends meet. Tensions intensified as hospital bills increased. The siblings spent many hours out-of-doors, not to play, but to escape their parents’ loud arguments with one another.

When their family took up Falun Gong in 1996, the fighting diminished. Wang was 15 at the time. She distinctly recalled how through meditation, her father’s diabetes subsided. “We were happy,” Wang recalled.

Wang is currently living in upstate New York, close to her brother. But as soon as her (second) daughter grows older and she can save up some money, she plans on returning to New York City to continue her human rights efforts.

“Worst of all, we are not alone,” she said. “There are millions of Falun Gong families like ours who are still enduring brutal persecution in China.”

24.09.2018 start Comments Off on TheJournal.ie: Doctor reveals reality of organ harvesting in China 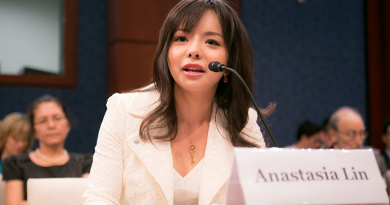 Why is China afraid of this Beauty Queen?