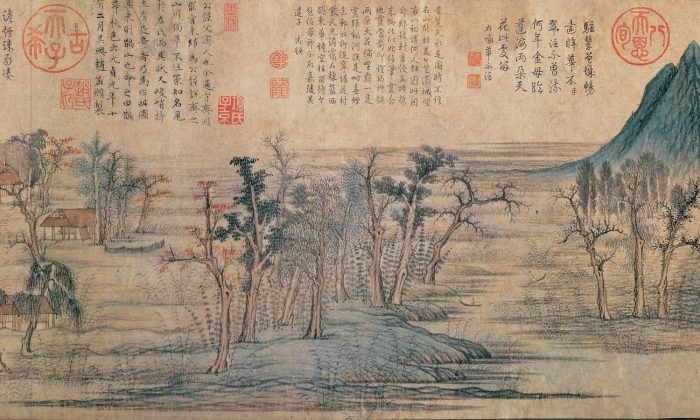 Nature reflecting the Yin-Yang of the Cosmos

Chinese landscape painting, known as shan shui (“mountain water”), can be considered one of the highest forms of expression in ancient Chinese art. But what makes this genre so unequivocally identifiable?

It begins with the fact that the ancient Chinese believed that heaven and earth exist together in harmony. Thus, ancient Chinese landscape artists sought to portray nature’s relationship with the entire cosmos.

Taoist philosophy strongly influenced the development of the ancient Chinese landscapes as an art form. The ancient Chinese had always believed that mountains were close to the heavens, as they were sacred dwellings for immortals.

Thus, Taoism emphasizes that humans are insignificant in the great cosmic flow of nature. Ancient Chinese landscapes depict humans as mere specks and exhibit a great veneration for the forces of nature.

Furthermore, the balance of yin and yang was essential in the design of the landscape painting. Mountains are tall and robust, representing yang, whereas water is soft and flowing, representing yin.

Ancient Chinese philosophy emphasizes that true painting must embody not only the form but also the spirit of the subject. The depiction of outward beauty in itself was not enough, as the artist sought to capture the inner vitality of nature. The outward appearance of a natural phenomenon was portrayed in tune with its spirit and energy, so realism was not the artist’s ultimate purpose.

Unlike Western landscape paintings, Chinese landscapes do not have a fixed perspective but instead depicted different perspectives and multiple points of view.

These characteristics define the genre, but with each successive dynasty, important painters, here described through the Yuan Dynasty, have contributed to certain subtler traits of Chinese landscape painting.

The Five Dynasties and the Song Dynasty 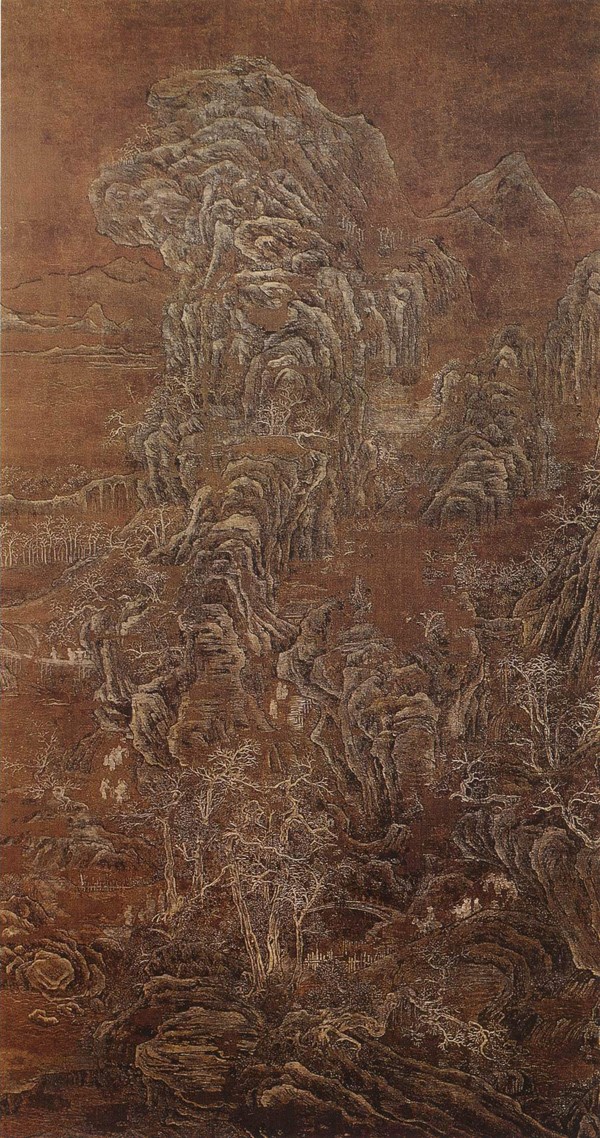 “Travelers in a Snowy Landscape” by Jing Hao. Hanging scroll with white pigment and ink on silk, 53.5 inches by 29.5 inches. The Nelson-Atkins Museum of Art, Kansas City, Mo. (Public Domain)

The periods of the Five Dynasties (907–960) and the Song Dynasty (960–1279) are known as the “great age of Chinese landscapes.” While artists of the earlier Tang Dynasty (618–907) focused mainly on figure painting and Buddhist icons, landscape painting had become an independent genre by the late Tang Dynasty.

Jing Hao (855–915), a landscape painter during the Five Dynasties period, founded the Northern landscape style. His “Travelers in a Snowy Landscape” depicts a deep winter of snowcapped mountains and barren trees. He uses bold and crisp lines to delineate the precipitous, high mountaintops characteristic of northern China.

Another Five Dynasties period landscape painter, Dong Yuan (circa 934–circa 962) founded the Southern landscape style. In his “Xiao and Xiang Rivers,” he portrays a river inlet traversing between rolling mountains. Pale mists soften the mountain line to characterize the billowing landscape of the southern Jiangnan region.

It was during the Song Dynasty that landscape painting flourished and underwent profound development. Li Cheng (919–967) defined and created the Song national landscape style that emerged. Influenced by both the Northern and Southern landscape styles, his work combines the dramatic high mountains from the Northern masters with the rolling hills and soft pale mists from the Southern masters. With this, he was able to create a harmonious style that became the official canon of Song landscape painting and influenced generations of artists. 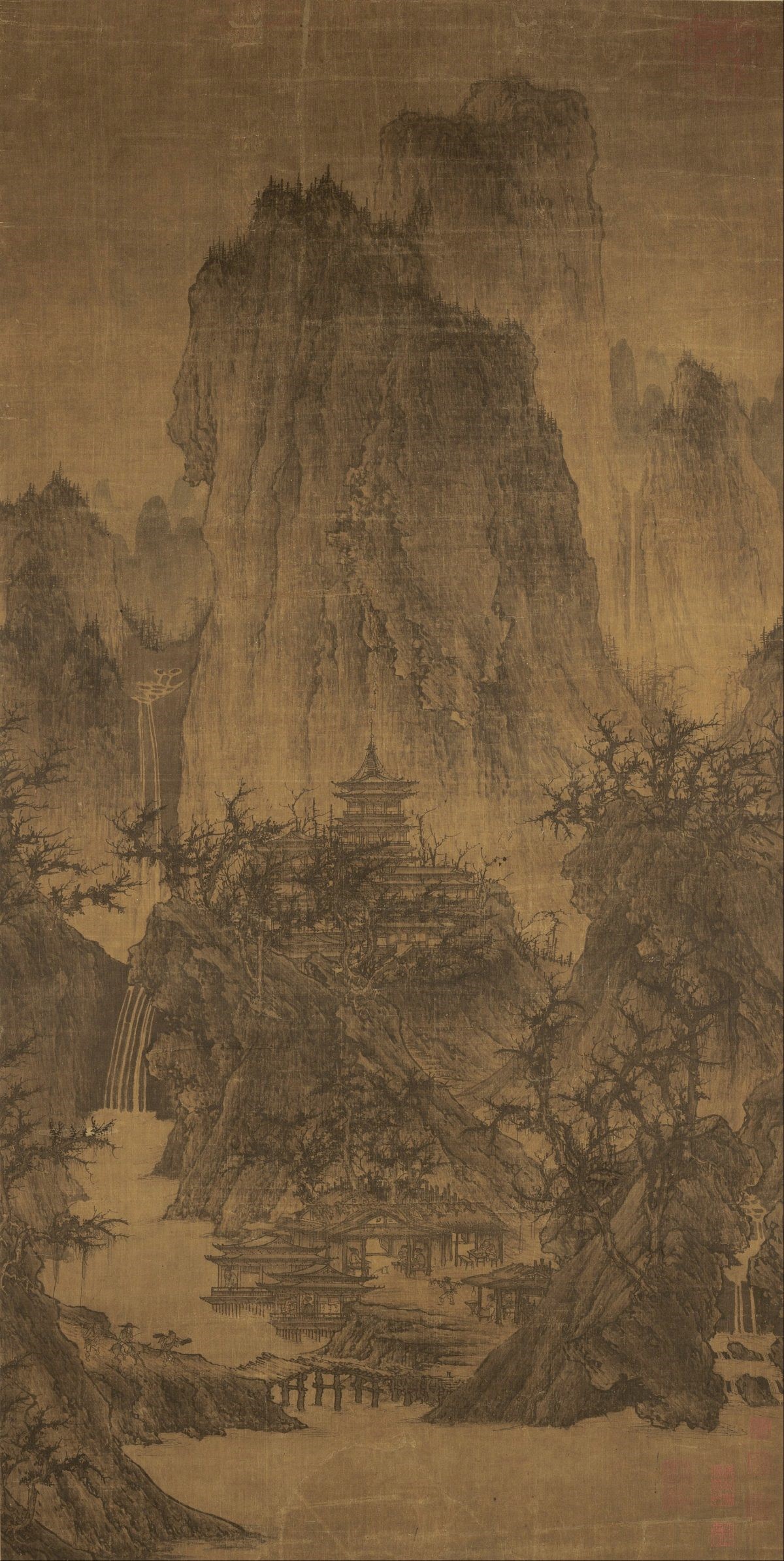 A Solitary Temple Amid Clearing Peaks” is perhaps his best-known work that represents the Song national landscape style. We immediately notice the majestic central peak that is the focus of the painting. Surrounding the central peak are several smaller peaks engulfed by light fog and disappearing into the mist. A solitary temple sits in the middle ground near the base of the central peak. The trees have dark outlines and seem to have a prickly texture. Li Cheng juxtaposes precise brushwork for the structural architecture with pale ink for the backdrop of the misty mountains.

From the temple, an obscured pathway leads to a small village in the foreground. The waterfalls at the periphery form a river that flows around the shore. To the lower left, three villagers proceed to cross a wooden bridge to join the folks in the taverns on the other end.

Meanwhile, several scholars converse in the pavilions near the riverbanks. However, all of the human activity lies at very bottom of the painting and is rather overshadowed by the vast expanse of the mountains. This is consistent with the Taoist philosophy of human insignificance in the great cosmic flow of nature.

The compositional structure is analogous to the Song Empire itself and seeks to capture the relationship between nature and divinity. Symbolically, the great central peak represents the emperor, who is the Son of Heaven, while the surrounding peaks and hills represent his ministers.

A sense of both tranquility and mysticism is instilled within the piece, and we are left to ponder the grandeur of nature.

The Yuan Dynasty and Literati Movement

During the Yuan Dynasty (1279–1368), China for the first time was under foreign rule. The Mongols had no tradition of employing scholars as administrators, so many Chinese scholars and artists were excluded from the Yuan court. Many of these elites turned to private retreats for sanctuary and turned their estates into places for literary and cultural gatherings. They identified themselves as literati through their poetry, calligraphy, and painting.

While the concept of a private retreat was not a novelty, the Yuan Dynasty witnessed the development of the literati movement as the dominant artistic movement. Literati painters employed calligraphic techniques as a means of self-expression. The painters tried to depict not only what they had seen but also what they felt. Thus, their works are like windows to their minds and souls.

One of the most influential Yuan Dynasty literati painters was Zhao Mengfu (1254–1322). At the Mongol court, he held a number of high positions under Kublai Khan and other emperors. Despite his service, he adopted the attitude of a recluse at court and believed that he could remain spiritually remote from the public even with his engagement in politics. 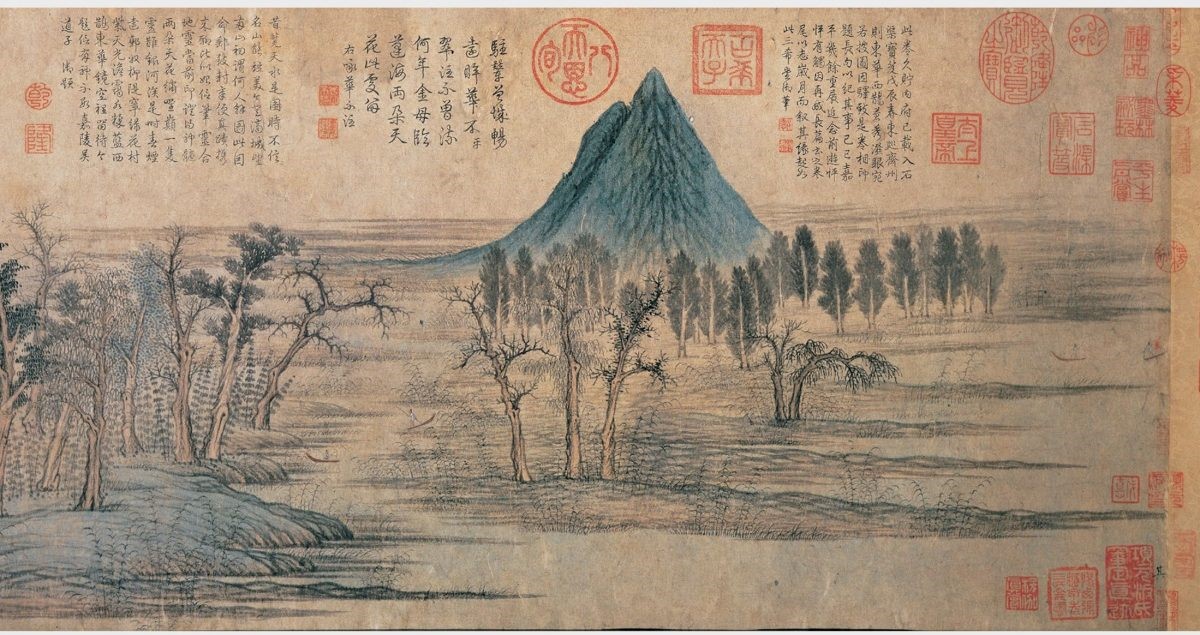 One part of “Autumn Colors on the Qiao and Hua Mountains,” 1295, by Zhao Mengfu. Handscroll with ink on paper, 11.2 inches by 35.5 inches. National Palace Museum, Taipei. (Public Domain)

“Autumn Colors on the Qiao and Hua Mountains” is Zhao Mengfu’s most famous work in the literati style, and it influenced many later Yuan landscape painters. Zhao Mengfu painted this piece for his close friend, Zhou Mi, whose hometown was in Shandong. Because Zhou Mi could never return to his hometown, Zhao Mengfu painted the piece for him from memory, having visited the place before as a magistrate.

The Shandong scenery is set in marshy fields, flanked by two mountains painted in a blue-green hue. The mountain on the right with the sharp peak is Mt. Hua-bu-zhu, and the loaf-shaped mountain on the left is Mt. Que. 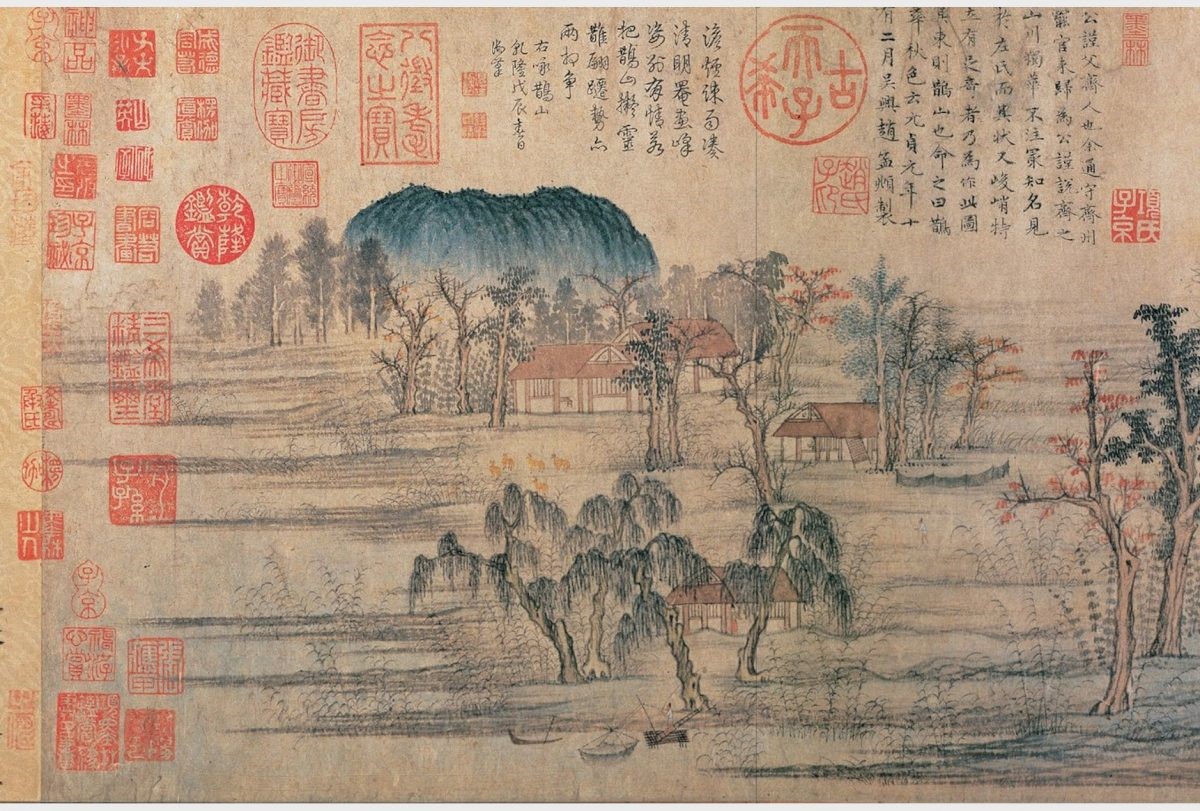 One section of “Autumn Colors on the Qiao and Hua Mountains,” 1295, by Zhao Mengfu. Handscroll with ink on paper, 11.2 inches by 35.5 inches. National Palace Museum, Taipei. (Public Domain)

While most trees in the painting still have green foliage, the few that have turned orange signify the autumn season. Intermingled in the thicket of grasslands and reeds are cottages, goats, and small figures that add a touch of life. As we look closely, there are people who are fishing with nets, paddling in canoes, and doing chores in their huts.

Zhao Mengfu’s painting technique is innovative in style. Entities do not diminish with distance, and his brushwork is calligraphic in nature. To depict the marshy fields, he uses curvilinear rope-like brushstrokes that interweave to form different layers. Through innovative brushwork, Zhao Mengfu brings out the imagery from his heart and mind. These techniques give a pastoral, rustic elegance to the piece that evokes the nostalgia of home.

The late Yuan Dynasty saw the emergence of the Four Great Yuan Masters, who were all influenced by Zhao Mengfu. Among the most innovative and influential was Huang Gongwang (1269–1354).

Huang Gongwang’s most admired work is his handscroll, “Dwelling in the Fuchun Mountains.” The scroll depicts the Fuchun Mountains located west of Hangzhou, where he spent his last years in retirement. Starting with a stretch of river, the painting spans mountains and marshlands, and ebbs away with ink-wash hills. Its innovative aspect lies in the abstract quality where the mountains and hills are almost geometricized into interlocking shapes.

A detail from the right side of “Dwelling in the Fuchun Mountains: The Master Wuyong Scroll.” 1347-1350, Huang Gongwang. Handscroll with ink on paper, 13 x 250.7 inches. National Palace Museum, Taipei. (Public Domain)

The Image shows one part of “Dwelling in the Fuchun Mountains: The Master Wuyong Scroll.” 1347–1350, by Huang Gongwang. Handscroll with ink on paper, 13 inches by 250.7 inches. National Palace Museum, Taipei. (Public Domain)

While Zhao’s technique of interweaving brushstrokes is evident, Huang depicts richer textures with monochromatic ink by overlaying dark on light ink, as in the trees and accented dots. His brushwork is loose and spontaneous, revealing a sense of oneness with nature.

“Dwelling in the Fuchun Mountains” proved to be a much studied work and had a far-reaching influence on later literati painters.

The artistic styles that emerged during the Song and Yuan Dynasties established the foundation for landscape painters in the Ming and Qing dynasties.

Mike Cai is a graduate of the New York Fei Tian Academy of the Arts and the University of California–Berkeley.

Life Exists Because of One’s Soul 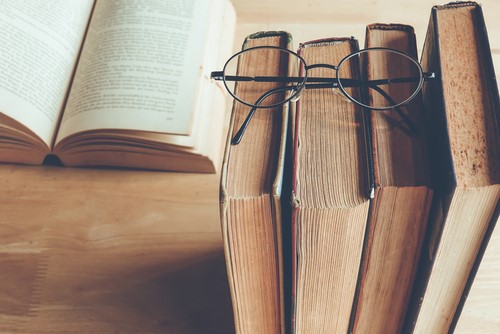 A Backward View: Older Books and the Culture of the Now

01.01.2019 start Comments Off on A Backward View: Older Books and the Culture of the Now